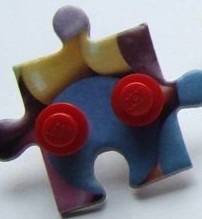 I have recently been asked on Twitter the following:

“I’m going to ask a question but you don’t have to answer. So, I just started wanting to understand autism better since my son was dx, and I know the best knowledge comes from those actually in the community. Anyway, I imagine as you get (o)lder* it’s important to have an understanding community you can relate with; so why is this community so divided? I’ve seen many very respectful, but I also saw some downright cruel to one another. And guess my question is what happened, why [Are]* there some people in this community that [are]* so viscous and vile? I just can’t understand why a few are determined to tear others down?”

The question which I read at 06:26 this morning, grabbed both my mind and heart with its absolute, wise candour, prompting my following answer thread:

“A real “autism community” is a mirage, generated from noble intentions, an illusion however, because Autism is the epitome of individualism, defying any true group cohesion. 1->”

“Further, since Autism is characterised by polarised thinking patterns, it inevitably generates extremes, which will inevitably clash. This unfortunately, will tear down any attempts to create a monolithic unity, leading to “factionism”, dominated by belligerence and loudness. 2->”

“The ONLY way of mending this self-generated gap, is rationally accepting the legitimacy of situational truths, where valid, evidence-based fragments of an endless reality, are allowed to be mutually/reciprocally used as building bricks of a developing understanding of Autism. 3->”

“The Puzzle Piece was a valid beginning. However, the time of the LEGO brick has come. LEGO bricks are the best descriptors for infinity, better than the closed-circuit Mobius symbol, because they can’t be practically “complete”. Anything meaningful in LEGO must be agreed. 4->”

“And real-life agreements are reached only through the mutual acceptance of any remaining disagreements. Autistic nirvana is real. It is the simple acceptance of a perfectly autistic dichotomy of open ends, where for every aspect there will be an anti-aspect. 5->”

“Once un understanding has been reached about the fact that the very existence of “disagreement” as a concept, is guaranteed by the pre-existence of a concept called “agreement”, mutual acceptance becomes possible*. Life itself is built upon acceptance-rejection, yes-no. 6->”

“What makes us human nevertheless, is an understanding of this dichotomy, a rational acceptance of the axiomatic right of every disagreement to live in the protective shadow of an* agreement. The only other alternative is war, ultimately mutual annihilation. I’ve chosen therefore, the * LEGO way*.”

As you may see, I have intentionally left everything twitter-formatted; because it best covers the core essentialism of my thought, summarised in the last tweet:

“The only other alternative is war, ultimately mutual annihilation.”

I’ve seen and experienced cruelty and meaningless trolling on twitter, which has left me scarred for a lifetime. Lives on the brink of emotional ruin, behaviours which in a real-life scenario could seriously extend someone’s psychiatric hospitalisation, all for the almighty sake of winning oftentimes questionable arguments.

Much of the time I have spent on this platform hijacked by extremism and abuse, it was time robbed away from the duty I have due the talents I’ve been bestowed upon, a waste of energy and resources, with one apparent reason, an unwarranted albeit necessary dive in the rabbit hole of my own darkness and fears.

I’ve seen and experienced enough, time has come to move on.

I will start by unblocking all those (quite few unfortunately), of whom I believe to have seen a side different than the one I may have encountered while incidentally intersecting with their own, rabbit hole dives.

I will carry on building my side of what I believe to be valuable in a dialogue, at the moment between the moderate pro-ND and ND-critical sides, awaiting any reasonable proposals to interconnect with similarly minded individuals from the “other” side. The fact that individuals find themselves on either side of Neurodiversity, may show an interest, an eagerness to maybe find valuable aspects and details for a much necessary common ground. Exception from this willingness concern those determined at this time to trivialise the Medical/Clinical Model of Disability, together with those seeking to do the same about the Social Model of Disability in regard of their relation to neurodivergent conditions.

I am to this end, openly and respectfully calling Judy Singer @singer_judy to a constructive dialogue, away as much as possible from twitter, of reconsidering Neuro-Diversity from the perspective of nearly three decades since the concept saw the “light of day”.

It is a rather desperate call, rooted in my unwillingness to passively witness the annihilation of a genuine possibility for progress and development, long due in the lives of autistics, individuals with autism, their dedicated families and carers. We are already witnessing the disastrous results of a derailed neurodiversity militantism, in the lives of families having had drastic, valuable government funding reductions, following biased and unwarranted lobbying by groups unwilling to see beyond subjectivism in regard of effective behavioural interventions.

This is also an invitation to all those who are willing and capable for as much as possible to lay down or bury the hatchet of past grievances and participate in such a dialogue. I am aware that many such grievances have gone too far into the realm of personal offensiveness, having maybe left irreversible emotional trauma and scars. And while forgiveness is always on option, it doesn’t come for granted. It is up to every one of us, to seek, give or receive it as individually considered, because I do not see the Stockholm Syndrome an option for cooperation.

In my title, I ask, “Is an ‘autism community’ a dangerous mirage, or a valid social construct?”

I believe that if it becomes bound to a hive-mind, with enforced, rigid language policing and taboo subjects, it is no better than an aggressively militant mob, a mockery and indeed a dangerous mirage of a dystopian “community”.

A genuine community allows for growth, change and constructive debate, where all members have equitable rights and responsibilities, aware that behind all objectivity, hide real lives of individuals with subjective ideas, behaviours and needs.

3 thoughts on “Is an “autism community” a dangerous mirage, or a valid social construct?”